This is the sixth in a series of posts, each chronicling in detail the ins and outs of my Robotics class on a weekly basis. I teach an introductory course using the LEGO Mindstorms EV3 set. My students are 7th graders who are required to take the course and may not necessarily have any background in programming/building. My school is on a trimester schedule so the course runs for thirteen weeks at a time. For this particular trimester I have one class of twenty-four students and one class of thirty-four students. I meet each class for one 50-minute period each day, five days a week. I have thirty-four computers in my classroom and one EV3 kit for every two students. I’ve been teaching this class in its current form for two years, though I’ve been teaching Robotics for eight all together.

Let’s start with a fun video. Watch the student at the end.

And that’s why I teach Robotics. With all due respect to every other teacher in my school, the students don’t usually jump for joy when they get a good grade on their spelling test.  🙂

This unit is all about meshing gears for greater acceleration or torque. I used to introduce gears and gear ratios on the same day but this time I decided to switch it up and split those into two separate days.

On the first day I presented the class with the following learning target: I can describe the actions of gears when meshed with each other in various configurations.

At the same time as I introduce the learning target I display the picture below and give students instructions to grab the pieces from their kit and meet me at the whiteboard tables in the back of the class. 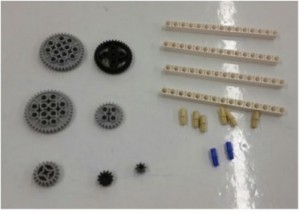 I’m not interested in the students getting exactly those pieces, just some large beams, a bunch of half-pin/half-axles, and a handful of different sized gears. I find the picture really helps and saves a lot of time.

The reason I spend an entire class on this lesson separate from the gear ratio lesson is I really want the students to understand what these gears do when meshed together. If I rush past it and also start them calculating ratios in one day, I find the understanding doesn’t sink in.

So I show them an example and tell them to put two gears of the same size together on a beam and mesh them, explaining the new vocabulary word as they are using it. I tell them to spin one gear (either one) and record their observations. I tell them to do this with different size gears in different configurations. Here are their results from this initial activity:

Here’s an example of a student team who really seem to get some of the ideas I’m trying to help them discover:

They understood that pairs of gears will always turn in opposite directions and that when a big and small gear are meshed, the smaller gear will turn faster. These are the fundamentals I want them to come away with this first day. To emphasize this point I have them mesh a string of gears together and then figure out if there’s a pattern. It’s important to realize that not all groups get it as quickly as the one above and as teachers we really must give students time and be patient with our questioning techniques. That’s something I worked on myself during this unit.

The group above wasn’t quite sure and took a while to get it, which is okay. (BTW if you notice that my voice is scratchy, I had a massive cold during this week and my boss was observing me this lesson. Joy!)

Here you see the dawn of understanding coming across the same student holding the gears above:

If every students gets to this point on the first day, I consider it a success. As you’ll see later even after spending a day on this lesson, some students struggle to apply the concepts when building their robots. Which is okay. 🙂

The second day of this lesson I introduce the calculation of gear ratios. The learning target is: I can calculate the gear ratio of different sets of meshed gears.

Pretty straight forward, right? I also introduce the vocabulary terms, driver and follower. Of course it is not always straight forward and the hardest concept for students to understand is this: If you have a driver gear that is 5 times the size of your follower gear that means for every 1 turn of the driver, the follower turns 5 times. This simple reversal is not so simple; to some of us it’s obvious because in the first instance you’re comparing gear diameter (by counting teeth on LEGO gears) and in the second you’re comparing numbers of rotations. Some of my students understand the term “inversely proportional”, but most don’t. So I make it really explicit for them.

First I start with a simple example, like meshing the 40 tooth gear as driver and 8 tooth gear as follower. Most of my students students can reduce this ratio from 40:8 to 5:1. Next I have one student turn the driver (40t) gear and the other student count how many times the follower (8t) turns around with one turn of the driver. If they count right, they’ll get five turns of the driver for each turn of the follower. And the light of understanding will break over… a few of them.

I then give the student various ratios to work with and ask them to make those ratios with gears and to write them up just as I did. Here’s an example of their results:

Once again you see different styles achieving the same objective.

Once we’ve finished these first two days I introduce the concept of acceleration and torque, only I use speed instead of acceleration, however inaccurate that may be. It could take a long while explaining the difference between acceleration and speed to a group of 7th graders in non-Physics class and that’s not my main goal.

On the third day I introduce the learning target: I can mesh two gears of different sizes together to increase speed or torque by creating a drag racer or uphill climber.

I am very specific about this learning target because I have found students build vehicles with no gear ratios, with gears meshed together but the wheels attached to the driver instead of the follower and other variations. I like to be able to refer back to my learning target as often as possible in order to make non-judgmental values about what my students are doing.

I used to allow students to also choose a “slow” racer and while this was a lot of fun to watch it didn’t really fit the goal of the learning target. You can make a robot drive really slowly using methods other than meshing gears and that’s what would happen. Students could build a poorly designed robot or just power it down really slow. An uphill climber or drag racer needs to be efficiently designed and at full power to work best.

And now they get to work… 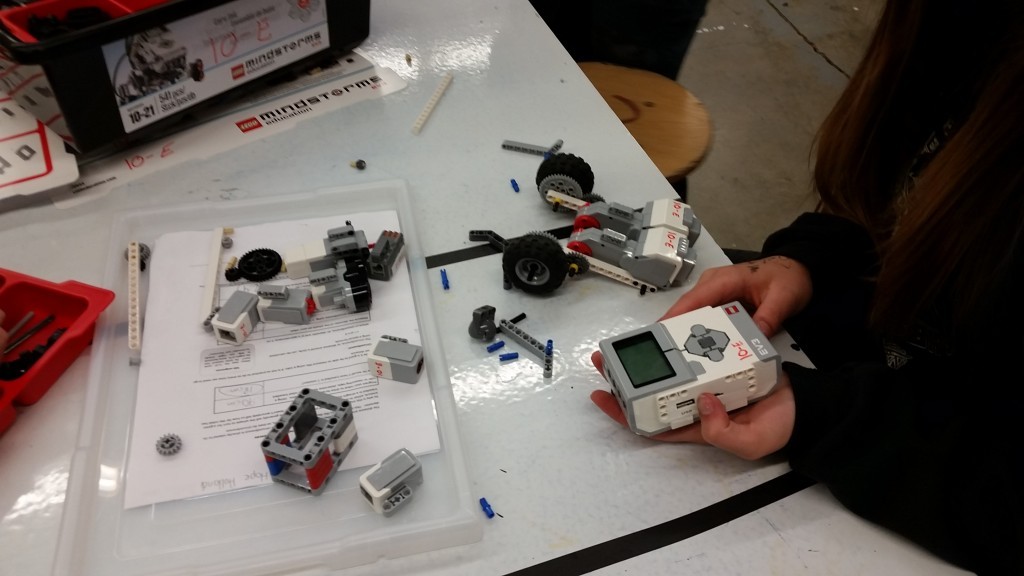 If you’ve been following this series of blog posts (A Week in the Life…) you may realize that my students have used either Damien Kee’s Riley Rover or LEGO’s REMbot for their initial work, The Wave, and Knock It Off. They haven’t actually built a new vehicle yet. And even though we’ve had two days of lessons on meshing gears, some of them are still very unsure of how to apply what they’ve learned to actual motors or vehicles. So I build a few examples of meshed gears connected to a motor and wheels to stimulate them – shout out to Randi Steele creator of STEM Robotics for this idea. 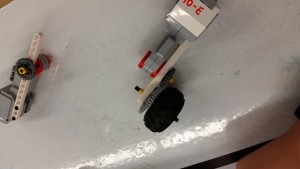 By actually showing my students some examples of how meshed gears can be connected to a motor and wheels, it helps them quite a bit. But there are still a lot of issues with building. 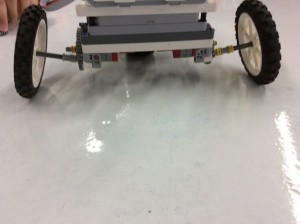 The above pic shows one of the most common problems students run into. They place the motors on the outside of their brick, then place meshed gears on beams outside of the motors, then place the wheels (with longer axles than needed) outside of that, and then ask me why it sags. The answer has to do with a few things. The weight of the brick in the center creates a lever effect for one. This can be countered by experimenting with motor placement, using shorter axles for the wheels, or placing one motor in front and one behind. The other reason axles bend is because they are smaller in width than the diameter of a beam hole. This is so they’ll fit but leaves room for flexing; it can be countered by placing an axle through two beams.

These two videos hopefully explain better than the above paragraph. 🙂

Some students have a fixed orientation in mind for their motors, forgetting that you can make them drive in either direction and you can place them in any orientation.

In this next video, I do a poor job of waiting for the student to tell me that he had originally placed this motor wires in different ports than he had programmed. I like to use the term “different ports” than “wrong ports” as all outputs are interchangeable. But my head was spinning with a cold and I was barely thinking by this point.

Finally for the first week of this unit, I had a student who used compound gear ratios to create a really fast robot. This is common with at least one team each time I do this unit. The problem is there is so much inertia to overcome that they rarely work. This student got confused and decided to overcome the inertia by adding a small gear as driver, which would change everything, though he didn’t think so.

See how the drag racers and uphill climbers turned out from this class and how I tested and graded them in the next installment of “A Week in the Life!”