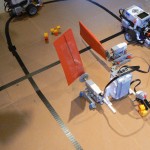 On 27 February 2015, a small group of EDGErs went to LEGOLAND for an EV3 Hackathon. This post documents one of the projects that came out of the event.

For the EV3 Hackathon, Magee and I built a low-tech intersection–one that controls traffic flow using boom gates rather than bluetooth signals. Since the cars were equipped with ultrasonic sensors, they were able to detect the lowered boom gates and stop.

Here is an overview of the program (click for a larger version):

The intersection also featured a pedestrian crossing. When the WALK button (a touch sensor) was pressed, both boom gates were lowered and the traffic light turned red. The EV3 display switched from saying DON’T WALK to showing a cartoon walker. A recorded voice said, “Walk.” After five seconds, the display switched back to DON’T WALK and the normal traffic sequence started again. Here is the pedestrian-crossing section of the program:

To create the cartoon walker, I used the Image Editor in the MINDSTORMS software to draw a stick figure walking. I saved the image to a file. I then edited the original image, changing the position of the legs, and then saved the new image to another file. In the program, I put both images in a loop, displaying each image for half a second. I ran the loop five times, creating a walking figure on the EV3 display for five seconds.

Because the walk signal could be pressed at any time, the program needed to keep track of the position of the two boom gates at all times, so that it would know which gate needed to be lowered for the pedestrian crossing. To do this, I used a variable, A down, to record whether the A boom gate was up or down. Each time the A gate was raised or lowered, the variable was updated. When the walk button was pushed, I used a switch block to lower the correct gate depending upon the current value of A down.

Barbara teaches at the Shady Hill School in Cambridge, Massachusetts and works at the Center for Engineering and Education Outreach at Tufts University. She is the author of several LEGO robotics activity books for teachers, most recently STEM by Design.