This creation is a LEGO-based version of Klann’s Mechanical Spider, which makes use of one of the best known walking mechanisms, the Klann linkage. The Klann linkage was designed by mechanical engineer Joe Klann and is very sturdy.

Several large creations based on Klann’s linkage have appeared at the annual Burning Man festival, including a 7 ton version built by MoltenSteelMan:

There were two main challenges in creating our design: approximating Klann’s linkage in LEGO and achieving consistent foot speed.

Walking machine linkages can be modified to produce different types of foot paths.

A foot path is the way in which the part of the walking linkage in contact with the ground moves.

Desirable characteristics of foot paths are:

I was able to do a simple optimization of the Klann linkage by creating a simulator of Klann’s linkage in the computer program Scratch.

You can use this simulator to create your own customized Klann linkages here.

Scratch allowed me to adjust the mechanism’s bar lengths by integer numbers to find a combination that created an optimal foot path in LEGO.

Even with a linkage optimizer, it is still difficult achieve consistent foot speed with Klann’s linkage. This isn’t an issue when on smooth surfaces, as the feet can slide. When on rough terrain, however, the increased traction of each foot causes Klann to lurch, as seen below:

How does one go about solving this? One way to stabilize the foot speed is to add rotating feet, decreasing the traction of each foot, which dampens the lurching effect.

You can see this solution implemented in this video.

Finally, here’s our latest version of Klann, which incorporates the linkage optimized in Scratch along with longer legs so that the EV3 brick can be mounted underneath Klann’s frame. 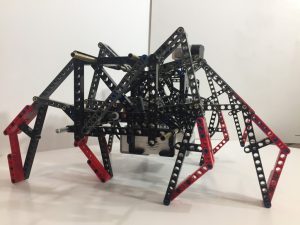 Note that this version does not have rotating feet. You’re encouraged to add them, or to come up with your own solution if you want to improve performance on terrain that has traction.

For more information, visit Klann’s Mechanical Spider with Longer Legs (Ver 3)  at www.DIYwalkers.com. If you decide to build your own, please let us know.

Ben Vagle is a high school senior in Colorado. His childhood was spent observing animals in nature and building with LEGO, and these passions are alive and well in his role as a young maker.