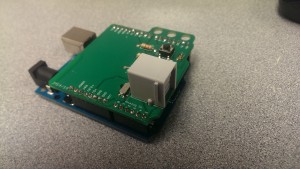 This summer at the CEEO, one project in progress has been an EV3 shield for Arduino Uno boards.

The first shield was created by Tufts graduate student Jessica Scolnic. The idea is to make a board that attaches to both an Arduino and EV3 and is able, via LabVIEW, to be an extension to the EV3.

Some example projects that have been tested are:

The next steps include a redesign of the shield and the addition of further functionality. The shield is programmed in LabVIEW using basic Arduino functions like read and write digital.

The functions in LabVIEW are translated to Botspeak and then are read by the VM (virtual machine) already pre-loaded onto the Arduino. At the moment this project is still being tested and improved.

Latest posts by Phoebe (see all)