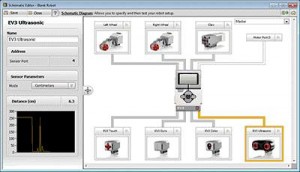 EV3 support comes to LabVIEW with the release of the LabVIEW Module for LEGO MINDSTORMS (formerly the NXT Module).

As well as providing support for the LEGO MINDSTORMS EV3, this LabVIEW module includes updates and bug fixes for the NXT. This module is available as a free download for any existing LabVIEW users.

To find out more or download and the new module, visit: https://decibel.ni.com/content/docs/DOC-15615

Note: The language of the module must be the same as your LabVIEW installation!