This is my last post on my build of the Liebherr Crawler crane (unless I do some modifications after having it for a bit).

I got the counter weights on and filled the bottoms with nuts (as in nuts and bolts), and found out that with the weight of the mast on the front and the counter weights on the back, the turntable was too small and so the base would break off when I tried to turn it.  So I ordered a bigger Technic turntable to use instead. While I was waiting for it I found I had one already on an old set, so I took that one off and put it on the crane (and now I have two extras!). 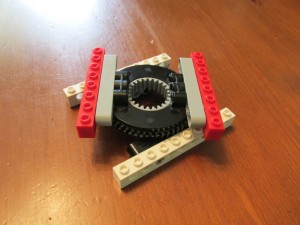 It works better because instead of being on a regular 12 stud disc — which made the body like a melon balanced on a pencil —  now it’s a bigger surface area to sit on. Also, the Technic turntable is integrated (it’s not two pieces that can pop apart) and has holes for pins on the side of both the top and bottom to attach Technic bars which then attach to studs. That makes the whole things stronger and more stable. 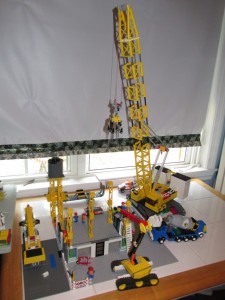 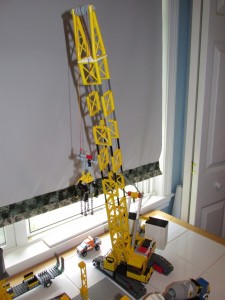 I learned from this that I am more capable in working with LEGO bricks and LEGO engineering that I thought. I was able to build an MOC (My Own Creation) this big and complex and functional without help. Besides looking up the instructions on the tracks, I didn’t use anything else for the build other than what I knew the trucks looked like. Afterwards I did look at pictures of real trucks and realize the support structure for the mast is closer to the mast so I made that adjustment. The winches and rigging and movement I just worked out on my own as far as how to engineer it in LEGO based on what I knew about the trucks. It came out exactly as I was hoping it would and I’m very happy with it and it’s made me feel more confident about other truck projects I want to do. I may go ahead and add the fly jib now that I have a more secure turntable. If I do, that will be my p.s. post!

I’m not sure there’s much for me to add to this. The confidence boost he got from this project is undeniable — and shouldn’t be disregarded. Schools (well, good schools) go out of their way to create units and curriculum that provide kids with an opportunity to challenge themselves, find what excites them, requires independent research, planning and thought, provides opportunity to design, test, troubleshoot and redesign; they provide an environment where failure is *always* an option (shout-out to Mythbusters!), there’s room to brainstorm, re-think, start over, etc.

Project-based homeschooling doesn’t have to create the curriculum. The whole point is to hear your child’s enthusiasm/curiosity/interest in something, ask them questions, facilitate their exploration, follow their lead and let them own their learning. Had I set out to create this and then present the project to him he might not have taken the bait. Or he might have taken it, but not owned it. This was his from start to finish, and what he learned was not only about LEGO and engineering, and problem solving and creating, what he learned was also about his own capabilities. He learned to not underestimate himself. To not assume he can’t, just because he never has. And that can’t be taught. That comes when a person is allowed to take something on of their own choosing and then follow through. And it’s the best of what homeschooling can offer. I’ll end with a quick recap — prototype followed by final build, because this about says it all.