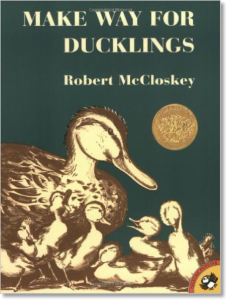 The classic children’s book Make Way For Ducklings by Robert McCloskey provided inspiration for a workshop at the LEGO Learning Symposium 2016.

Led by the EDGErs, the workshop was intended to provide participants with an opportunity to explore some intermediate to advanced tools and techniques relating to the LEGO MINDSTORMS EV3 platform, including:

In the book, Mrs Mallard leads her ducklings across Boston, helped at one point by a police officer who stops traffic for them.

Our initial idea was to use a group of robots to model the behaviour of Mrs Mallard and her ducklings in some way. For example, we thought it would be interesting to have a robot representing the mother duck, with the duckling robots following the mother, and not always reliably.

Other robots could model other features of the story, such as the police officer, cheering onlookers, and traffic.

We proposed these challenges ideas:

If you have a suggestion for another challenge related to this theme, please let us know in the comments below.

Here are some of the results of our workshop: