Paweł “Sariel” Kmieć lives in Warsaw, Poland. He has designed over 200 LEGO model vehicles including cars, trucks, trains, and ships. His models have been featured on Top Gear, Jalopnik, and Engaget websites, among many others. His LEGO tanks are particularly impressive for their realism and have been praised by military experts and members of tank crews. Sariel is also the author of LEGO – Unofficial LEGO Technic Builder’s Guide and Incredible LEGO Technic. Sariel has been selected by LEGO as an official reviewer of the LEGO Technic sets.

How did you get started building with LEGO bricks?

I started playing with LEGO as a kid, going through a number of themes including, Pirates and Castle. However, it was Technic that fascinated me most and left a lasting impact. As I was growing up, my LEGO collection ended up in the attic, but when I was in my twenties, I felt a need to tinker with Technic pieces. Fast forward 10 years and here I am with 200+ custom models built and two books written on the subject.

Which project (or projects) are you the most proud of? Why? 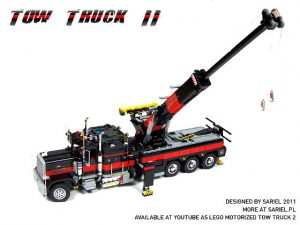 Definitely my Tow Truck 2 which included 17 motors and nearly 20 meters of wire. It was my most technically complex model at the time, and I’m still happy with its looks. Building this model has given me this sort of feeling that I can now build just for fun, without the need to prove myself. Which is why I’m equally happy building models that take years to complete and models that take an evening or two and just test a single concept.

Where do you find inspiration for new projects?

I’m mostly a vehicles fan – cars, trucks, tanks, you name it – but I also have a thing for aircraft and I’m fond of LEGO trains. Put it all together and I have more ideas than I can possibly handle. My to-do list is long enough to last another 10 years. I’m inspired by real-life objects: a machine I come across while doing some mechanical research, or a car I see on a street. I also like putting my LEGO builds in water, so I’ve built all sorts of floating cranes, fire boats that shoot water, and so on. Basically, I keep building things for myself to play with. It’s fun and it’s how you keep at this hobby for so long.

How many iterations do you typically go through when you create your projects?

Countless iterations, really. I’m always trying to do my best, which sometimes leads to reworking a single part of a model a dozen times. I remember building my Tiger XL tank model – I really, really wanted to get all the angles of its glacis plate right. I ended up reworking just the model’s front end eleven times, but I got a result that I wanted.

Do you document your creative process? If so, how and why?

I mostly document finished models, but over time I’ve developed a habit of sharing my in-progress photos and videos, primarily on my Facebook page. Since I’m always building several models at the same time, it lets people know where things stand on the model they’re most interested in, it gives them some inside look at how these models are made, and it’s also a good lesson for me. There’s plenty of competent people online and they sometimes correct me or give me information I didn’t have. It’s always very interesting to talk to people who operate the machinery you’re building a model of in real life.

What role does failure have in your creative process?

I accept failure as a natural thing. There are a number of possible solutions to each technical problem, so a failure simply tells you that this solution isn’t going to work and you need to try another. Failure is a lesson in itself, too. It’s like Thomas Edison [purportedly] said about making a light bulb: “I have not failed. I’ve just found 10,000 ways that won’t work.”

How do you evaluate your success?

I consider a model finished when I can’t think of any way to reasonably improve it. Then it’s up to the general audience to evaluate whether it’s a success or not. I always have some goals for every model: have a particular function, a particular load capacity, or a particular top speed. It’s rare to see all these goals met. Then I watch what the audience says, while I’m moving to the next project. What I consider a success and what the audience likes isn’t always the same thing, of course. The best example is my most popular YouTube video, which features a simple 1:1 scale LEGO chainsaw. It’s a dead simple model; it has a single motor and took no more than two days to make. Yet, for some reason, it got far more views than my vastly more complex vehicular models.

For students who are ready to go beyond the basics, what project would you recommend to get them motivated, without overwhelming them?

I would recommend to progress in small steps. Every now and then I see new Technic builders who have little experience, but want their first, or nearly first, creation to be something that will shake the world. 99% of the time, it ends up in disappointment, because they lack the necessary experience. I believe that large, complex, and truly impressive models are built as a sum of experiences from smaller and simpler ones. For example, I can build a tank that will have active suspension, perform nicely against obstacles, look nice, and have a shooting mechanism – but I didn’t start that way. I’ve built over 20 tank models and tested different solutions in each of them. Now I have plenty of experience, plenty of lessons learned to lean on. If I wanted to start with a super-complex tank, I’m sure I would just get frustrated and abandon building tank models altogether. So, my advice is: take it easy. There’s nothing wrong with going slow and going small, whereas being overly ambitious very often leads to frustration.

“I believe that large, complex and truly impressive models are built as a sum of experiences from smaller and simpler ones.”

What’s your favorite example of using a piece in a way other than how it was originally intended?

I’ve seen someone use the door piece from small LEGO cars as a roll of toilet paper on a wall, that was very creative. From my own experience, my hamster figurine is a good example. I spent quite a while looking for a way to recreate the shape of the hamster’s ears. In the end, the solution was using LEGO minifigures’ baseball caps – they have just the right shape, size, and they can be easily tilted.

Also in Meet the Creator

I am a MINDSTORMS Community Partner (MCP). I have been involved with LEGO MINDSTORMS since 2010 thanks to Sanjay and Arvind Seshan (founders of EV3Lessons and FLLtutorials.com). I help to promote robotics and computer science education using MINDSTORMS in schools and communities. I have also been a FIRST LEGO League coach, judge and referee for 7 years.

Latest posts by Asha (see all)