In Part I of Motor vs. Move, we looked at how the Move block incorporates a control algorithm to help robots move more accurately. What else is different between the Motor and Move block in NXT-G?

The Motor block has an “Action” panel which includes a drop-down menu pertaining to how the robot’s motor will behave upon action.

The “Constant” selection implies that the robot’s motor will perform at constant speed from when it is activated to when it is deactivated (as programmed). In other words, as soon as the program initiates motor action, the motor will spin at the power level that you specify in the “Power” panel. This feature is excellent for when your robot needs only to travel at a constant speed, or for such things as a clock that requires constant power in its motor.

The “Ramp Down” feature allows for the robot’s motor to slow in speed when approaching a stop. This feature does pertain to certain restrictions. This feature can only be used when the motor block is preceded with a motor block set with a constant speed set to coast after execution (see second block of the sample program below). This allows for an initial speed for the motors during the “ramped down” motor block. Once the motor is activated, it spins at the set power level, but as it approaches a stopped state, it will gradually decrease in power level. This closely mimics the braking of a vehicle. Without the preceding block, the “ramp down” motor block has an initial speed of zero, and hence will not be able to slow.

Note that all of the actions are only available if the Duration is set to rotations or degrees.

The Move block does not contain any “Action” panel or the ability for you to specify how the motors will behave. This is due to the fact that there is already intelligence in the power component of the Move block (see Part I: The Control Algorithm). The built-in algorithm monitors rotation sensors on the NXT and slows the motor(s) as the robot approaches the target duration. Essentially, the Move block incorporates the “Ramp Down” feature of the Motor block.

Try it out: The merry-go-round 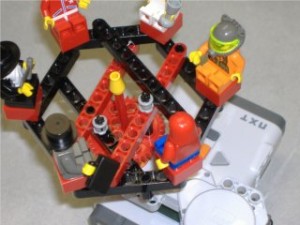 A Merry-go-round is a great application for the Move block’s “Ramp Up” and “Ramp Down” actions. Try them out by following the building and programming instructions in the Resources section. 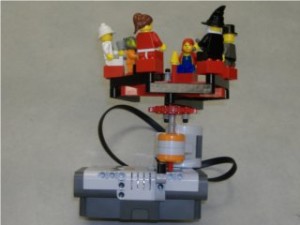