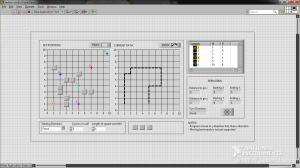 This summer one project I have been working on is path planning in LabVIEW for an EV3 robot vehicle.

This project came from an idea I had for an AR.Drone. That idea was to create a program in LabVIEW that would allow users to plan out specific paths for the drone. I decided half way through this project that it would be easier to make a program for an EV3 first and then modify the program to be able to control an AR.Drone. So far, with this program, a user can plan out simple paths for the robot using an XY graph in LabVIEW and movable cursors.

Future goals are to have the EV3 robot be able to detect and avoid obstacles, be able to implement actions throughout the path, and the ability to find the best possible path.

Latest posts by Phoebe (see all)

One thought on “Path planning in LabVIEW”