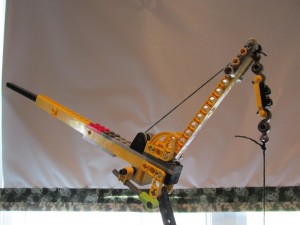 We homeschool. Unschool primarily, or hackschool, if you like. Our son, Lex, will turn thirteen this summer and has spent his life following his own interests, learning from the world around him and creating his own experiences (sometimes with facilitation and guidance from us). He has learned (as have we, on this journey) that if you are resourceful you can teach yourself an awful lot, or find a mentor or tutorial out there somewhere.

The Internet is a homeschooler’s best friend! So when Lex decided he wanted to take his love of LEGO building beyond the basic assembly of kits or minor modifications to existing sets, he got online, asked for help, and began to wow his friends with his redesigns of fire trucks, ambulances and basic construction trucks. But when he wanted to take that even a step further with moving parts and more complexity, he learned that what he was looking at was, in effect, Engineering. Structural and Mechanical Engineering. So off we went – in search of books, websites, workshops online and off. But what did we find? Not much. He could learn about gear ratios, yes. LEGO Education has stuff on pneumatics. But a search for Engineering always turned up Robotics. We’d shake our heads. No, that’s not it. Not Robotics — Engineering. Regular, old, engineering.

So where does that leave an engaged, curious, creative, inventive LEGO-building homeschooler when he wants to do more than what’s in the box and offered as a class? When he wants to embark upon his biggest, most challenging build yet? I think it’s better if you hear it from him. He is, after all, the Master Builder (at least, he’s in-the-making). 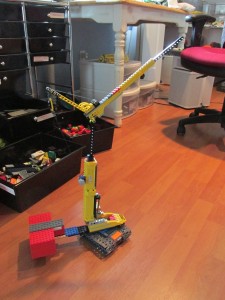 I want to try building a Liebher crawler crane which is used for major construction projects and heavy lifting.  I’ve seen them in pictures — real and LEGO — and I thought that it would be really fun, but I’ve never really been able to figure it out.

There are a lot of challenges because I’ve never done anything this big before.  I will have to work out things like rigging in order for the main mast to stay up and be able to lift, so I’d need things like bars going down to the support structure on the base.  The main section of the mast consists of a winch and pulley.  It also needs the ability to be able to hold a luffing or fly jib which both need winches and cables to stay and to move.   I also have to take into consideration counterweights on the track base, and size and balance. 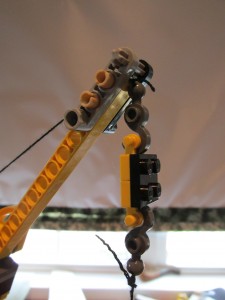 But there are issues because there’s not a lot out there in terms of videos or tutorials on how to do what I want to do.  So I have to look at a picture and just work off of that and use the knowledge that I have to try to figure this out.  Not a lot of pictures show the truck from all sides so I have to think in three-dimensional space. I really wanted to start right away but I didn’t have the pieces so I built a smaller, not-exactly-right version of the crane that I wanted to do.  It turned into a prototype of jib attachment, rigging, and counterweights.

We ordered pieces and I’ve been brainstorming, looking at pictures, and looking at the prototype crane to try to figure out how I’m going to start the real build.  I’m looking at pictures of other real and LEGO cranes, and what other people have done that’s kind of like what I want to build to get a general idea, but what I’m trying to do has never really been documented before.  I’m kind of on my own here.  I’ll be back as I start the build and share the process but here’s some pics of my prototype as I work out some of the basic ideas and structure.

So here we are. He clearly loves LEGO and loves going bigger and badder which, on its own, is a fine and challenging endeavor. But what’s really great is how much more is actually going on unintentionally (until it becomes intentionally, if it does); what he’ll walk away having accomplished whether he realizes it or not.

He’s learning to research and locate resources – including determining pieces needed, how many, and cost (think “project management”). He’s learning the design process, utilizing 3-dimensional thinking, problem solving, prototyping, testing, re-redesigning. He’s exploring and discovering forces, load, balance, counterbalance, mechanics, critical thinking and if that’s all not enough, by working toward this article he exercised communication skills, thought processes and getting his ideas and thinking down on paper. And let’s not forget things like persistence, frustration management, and working independently.

None of this was a curriculum we laid out ahead of time, but rather what came up out of the desire to create something he didn’t know how to do. Necessity drove the learning, and LEGO served as the tool. This will continue as he begins the real build that is in his head. As he works to take what he envisions, finds resources and references to help him with techniques and approaches he knows he needs but isn’t sure how to accomplish, builds, tests, identifies problems and mistakes, redesigns, fixes and tries again. And even then, there’s no guarantee that what he’s setting out to do will be successful (unless, maybe, this finds him a mentor to give him some pointers!). But he’ll learn a lot along the way. And we can share his progress, his process and the result, as well as how it’s relevant to play, learning and most importantly — life.