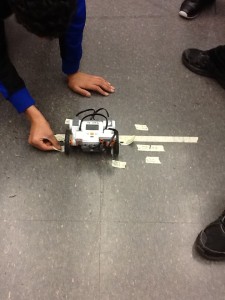 I recently ran a simple challenge that I called the “6 Tile Challenge” that worked well in my classes and got the point across that you should calculate the number of rotations before you drive your robot.  This was the second day of robotics programming for my classes and we had discussed the diameter and circumference of the wheel and how they relate to the linear distance that your robot travels when you program it in rotations or degrees. The students ran programs that would allow them to see the relationship between programming in degrees and rotations.

What I have found in the past is that the students understand this when we go over it, but never use it again when they are given distance challenges. They always revert back to guess and check and don’t think about the math when they guess.

The challenge is listed below.  They used the Domabot robot from Damien Kee’s book “Classroom Activities for the Busy Teacher”.

The floor in my room is tiled, so the challenge was for the students to drive their robot the distance of 6 tiles on the floor. I taped the distance in the middle of the room. The students were not allowed to test their robot and they had 10 minutes to get their robot ready for the challenge. The key was no test runs. No one was allowed to drive their robot during those 10 minutes. Then they lined up and we ran the robots one at a time on the field. We marked each team’s distance. Most of the teams were very close to the mark and all the teams did calculations before they programmed. A couple of teams in each class (each class has 13 teams) hit the mark exactly. After the challenge we discussed their methods of attacking the problem. Then I gave them the same challenge again, but they put new wheels on their robots. Next we used the large wheels (white motorcycle tires), after that we did the same challenge with the small car tires. 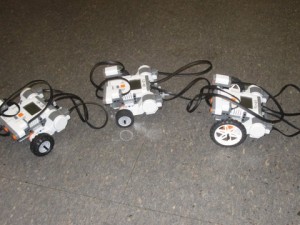 After this challenge the students seemed to now use the calculations first and not just program a random guess and check. They were very competitive and measured much more carefully than they did during the first day of robotics.  I wanted to share this challenge because it was simple and didn’t take a lot of time, but got the students thinking about the calculations behind the robot programming which I was finding they were not doing before. I think talking about the math behind the programming helps the students apply the math they learn in math class and see that math is important for other things.

I am a middle school technology teacher in Massachusetts. I teach robotics using Lego NXT Robots. I also teach robotics in a summer camp and after school.