This post continues the story of Melissa and her son, Lex, and follows on from their first post here. 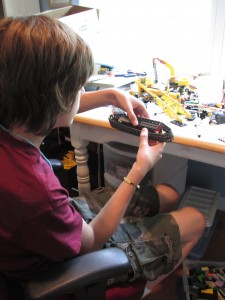 Lex was excited to get going on the build since pieces had arrived (some from France!). As tends to be the case, it started enthusiastically and with a great deal of energy, but after some time, and some roadblocks and issues, some discouragement set in. As a facilitator (and a mom) I have learned not to step in (although I’ll ask if he wants to brainstorm or is interested in input), and allow him to ride the waves of struggles and successes. It’s probably the hardest part, but it does make the “a-ha” moment that much sweeter. However, it can also lead to a flat-out, hands-up, quit. But not before a great deal of break-taking, rethinking and trying-just-one-more-time.

This time is no exception.

I started the tracks today but I was having trouble getting the tracks to fit right around the bars. I used Technic bars (the ones that are rounded at the end and used in telescopic fire truck arms) and connected them together but that didn’t work, so I tried different bars, but that didn’t work either. I spent a lot of time trying different things, but I got frustrated, so I stopped working.

I couldn’t figure out how to connect the tracks to each other on the base, so I looked up the instructions to the older LEGO crawler crane set. I realized I  needed to use Technic bricks instead of the telescopic bars because the bricks have studs on top so that I could connect the tracks together using flats and then put the turntable on top of the flats.

Once the tracks were done, I built the crawler base with a turntable base. Then, after all that was done, I shared the tracks with my mom, then in one sitting, I build the rest of the crane: the cab, the support structure, winches, mast, and basic hooks. The cable that holds the support structure which holds the mast is on a winch with a gear as a turn knob, and was staying in place just with luck. So I build a block with 1×2 Technic blocks, one with a “plus” shaped hole, one with a regular hole. I put a Technic bar through it with a gear on the end of it. I put the block behind the winch and the gears interlocked, and the “plus” shaped hole, kept the bar from spinning so it locked the winch in place. 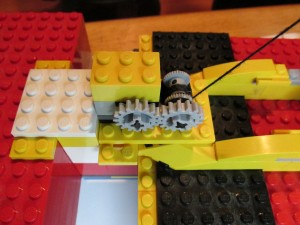 Later that night, I attached the counter weight, and started to look at details. I realized I need to make some adjustments, so now I’ll be making modifications and finishing the details. I need a larger turn table so we ordered a Technic one, I need different counter weights that I can fill with metal nuts, a different hook and I want to add another cable line. So, almost done. When it is, I’ll be back!

This is such a great example of what can happen when a child is allowed to engage in their interests and passions. He’s been at it all day. Hit a bump here and there, as he described, but nevertheless, he kept at it, looked things up online, dug through his brick bins, and worked at for the entire day. Like, a work day.  Sure, you say, any kid would build LEGO all day if they could. But the thing is, in our house, with our approach to learning, it’s never just building LEGO all day. I’m not even certain of everything that’s happening in his brain, and what skills he might be learning. I do know there’s a lot, though, and sometimes it shows up much later in a, “Hey — this like the (issue/obstacle/technique/simple machine) I was working on when I was building that crane.”  So a great deal of how we do things involves trust. But we have learned to do just that. Trust. Trust that learning is happening. Trust that he will find a way. Trust that he is on a path. When it works, it’s magic. And it always shows in him — the shine in his face of discovery, solutions, accomplishment. We know as adults the value of feeling you did it yourself, figured it out, fixed that leak, built that table, cured that disease. Kids benefit from the same feeling. But they need projects in which to do that. To try. To fail. To try again. To know when to quit. To succeed. They deserve to feel it. Because it’s pretty magical.