This is the first of probably fourteen posts, each chronicling in detail the ins and outs of my Robotics class. I teach an introductory course using the LEGO Mindstorms EV3 set. My students are 7th graders who are required to take the course and may not necessarily have any background in programming/building. My school is on a trimester schedule so the course runs for thirteen weeks at a time. For this particular trimester I have one class of twenty-four students and one class of thirty-four students. I meet each class for one 50-minute period each day, five days a week. I have thirty-four computers in my classroom and one EV3 kit for every two students. I’ve been teaching this class in its current form for two years, though I’ve been teaching Robotics for eight all together.

For my first post in this series I’m starting with the final week of my class from last trimester because it didn’t turn out well and I’m hoping that it goes better when I do the same project this time around. I have always wanted to do the Great Ball Contraption (GBC) in class, but thirteen weeks is a short time period and it’s hard to fit in new projects.

I went wrong from the start with this one. I began by showing the students some of the wonderful GBC videos out there, like this one:

Beginning with these polished videos and then having the students research GBC on their own I created some unrealistic expectations. I know we are supposed to always challenge students and hold them to high standards, but I didn’t have the supporting material, either in parts, teaching strategies, or time for my students to reach this high.

The first problem my students ran into was in forming uniform “in and out bins” located in the correct place. Steve Hassenplug – who started the GBC – has a great set of standards on his website for sizes and positioning and though I gave them to my students things quickly went awry. To start with, I have mainly technic pieces, not bricks, so it’s hard to build containers that are a certain number of bricks high. In addition we were going to line up modules next to each other in a specific order, but that turned into whoever is done and has a working module, partner up with somebody else. This led to two or more teams working together and thus they designed their “in and out bins” heights and placements to work with each other rather than following Steve’s interchangeable standards.

The in and out bins all looked sort of standard, but it took the students a long time to build them correctly and after they were built, they were then stuck with how to get the balls out of them.

Once they all built their boxes the biggest problems students had was in getting the balls out of their boxes. Nobody had a problem dropping balls into boxes, but getting balls out of them and lifted to a higher level was the biggest challenge we faced. This is where I could have done a much better job at teaching. I thought the students would copy a lot of the modules that they saw on YouTube, but instead they almost all went for a conveyor belt of some sort.

As you can see in the video above the conveyor belt going up was an easy thing to do, but getting balls up needed work. Also of note here is the use of multiple 40-tooth gears to move the conveyor belt. This is another place where I could have done some direct instruction. From our work on meshing gears for our drag-racers/uphill climbers my students understood that if you connect an odd number of gears together the first and last will turn in the same direction. You can see they applied that concept here. It would have been nice if I had taught them a bit about a belt drive and how the sprockets and conveyor belt work so as to not need the long line of gears.

Here’s some more of the conveyor belt modules: 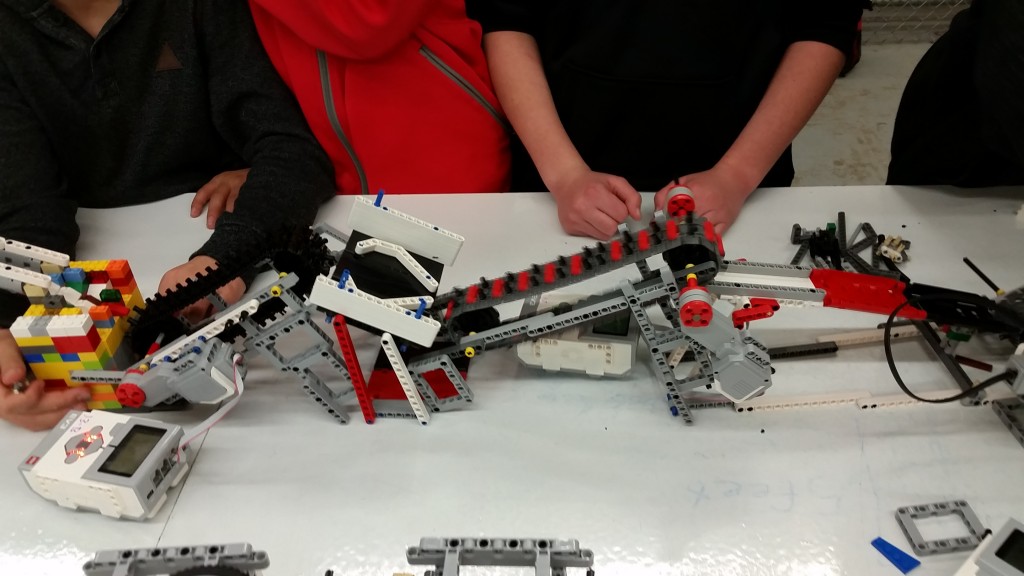 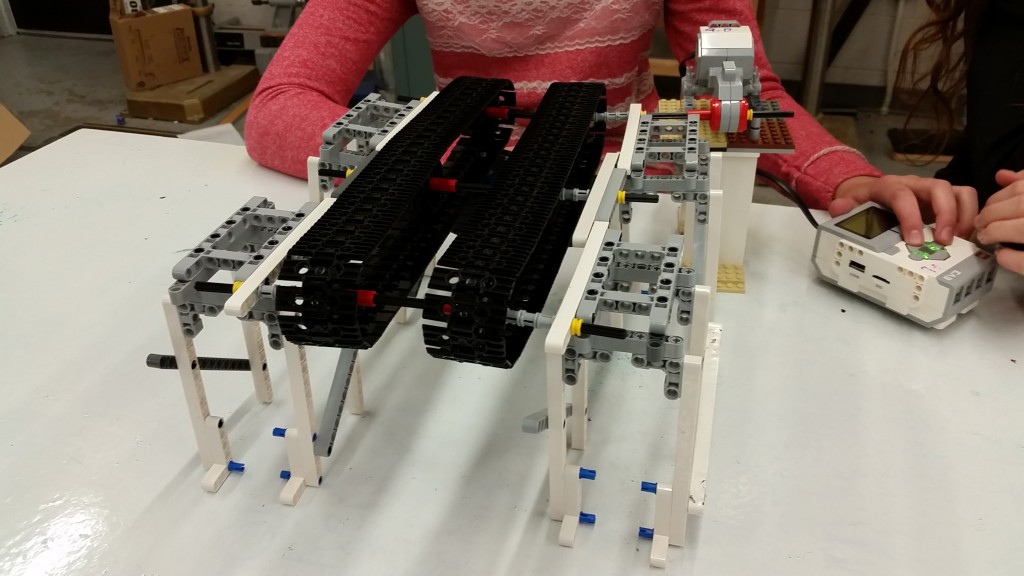 What I think I will do differently next time is purposefully teach some methods of moving balls from one place to another. For example, the scissor lift is a classic example of a simple machine that gains you vertical movement and would be easy for most students to understand and build:

Even though I feel there is a lot of room for improvement in the way I approach this project next trimester, there were some success stories. Grace and Jenny (of Magic Moments fame) came up with a really cool module based on videos they watched.

They connected theirs to a few others that were “working.”

Which eventually led to this:

Which leads me to my next point. If you want to try this in your class you’ll have to help the students with timing. Timing is an issue which I didn’t think of ahead of time and definitely need to be more explicit about at the outset. You can see a lot of the balls get dropped here just because they are brought from one module to the next at the wrong time. Again, Steve Hassenplug’s page has some standards for timing the delivery of balls, but it took most students so long to build and get their modules working that we didn’t have enough time to really work on programming. Other than slowing all motors down to power level 20. At any higher than that, things go all sorts of crazy.

Here’s my period 4 class and their attempt at the GBC:

A few final notes on this project. Because this was new I didn’t go in with a written learning target (aim, objective, your district may use another name) as I wanted to see where it led. I will have one 13 weeks from now when I do it for the 2nd time.

Base plates could be a big help in connecting a lot of these modules. LEGO bricks and lots of LEGO bricks and even more LEGO bricks. Especially all the funny shaped pieces you don’t think you’ll ever need. They’re really useful. Balls. Say it a lot and your kids will giggle if they’re middle-school aged (11, 12, 13). Say it enough more and they’ll get over it. Balls – the LEGO soccer, basket, and baseballs are extremely hard to source on a limited (school budget). You can find them on www.bricklink.com or www.peeron.com but not in large quantities or cheap prices. I used plastic marbles from a craft store.

I was at a conference for the last two days of this trimester when the students were supposed to be cleaning up but my teaching assistant sent me the video below of a contraption two students made. They were really proud of it though you can see that it doesn’t have a pick up or drop off point. Like I said in the beginning, I need to re-tool this project.

As I stated at the top, this is the first of 14 weekly class posts. I’d appreciate any questions, comments, ideas, strategies, etc. that you may have to help me and all the other Robotics teachers out there improve our pedagogy.  Thanks!