Teachers (and other people) often ask me how I go about getting my students to do some of their cool projects. The simple answer is I let them have as much freedom as I can to design the project themselves, and I give them all the available tools I have to make it easy for them. 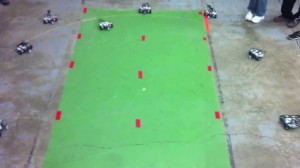 I learned about the Wave challenge from Damien Kee. I’ve been aware of Damien and his work through his books for a while. It was when I saw him give a presentation entitled Robotics: Easy as Pie at the Tufts LEGO Engineering Symposium in 2011 that I learned about the Wave and immediately saw how awesome and valuable it was. It combines so much good stuff for students: building a basic bot, proper wiring, wait for sound, wait for time, the move block, timing, coordination, teamwork, etc., in such an awesome way. I loved it immediately and included it in the beginning of my courses from then on.

The one thing that was missing was choice. So immediately after the Wave was done, I’ve had my classes design and create their own robot dances. These usually take between 1 and 2 weeks to complete. I have seen some of the coolest work during this stage of my classes. There has been the Gauntlet, the Harlem Shake, the Concentric Circles, and now the Circle Wave.

Visually the Circle Wave is really cool, but basically it’s all about timing and coordination. Every single move is forward 2 seconds at power 100, then back – right up until the spin and note playing at the end.  In between it’s all timing.  All my class robots are numbered. We first did all robots in and out, odds in, evens in, main compass points in, secondary points, and then the rest (15 robots in all didn’t break down neatly in imaginary clock or compass points). Then in and out one at a time and finally each spin while playing a note. The robots were set up sequentially around the circle and the students used algebraic formulas to figure out their programming code, with X being equal to the number of their robot. For example, wait 5 seconds – X, then move forward 2 seconds.

As you can see the results were quite remarkable.

If you’d like to see more of my work, check out my YouTube page and my blog, and here’s a link to the Best of the Waves Playlist.