The new EV3 software is backwards compatible with the NXT. But what exactly does this mean? What works? What doesn’t work? What sort of works?

Here is a quick rundown:

Programming: The NXT can be programmed using the EV3 software. Most of the blocks work well. Obviously, features that are only found on the EV3, such as the brick status lights, cannot be used with the NXT. The LEGO sound and image files that come with the EV3 software can be used on the NXT, but many of the images do not display properly. For example, here is the image file “question mark” displayed on the NXT and the EV3: 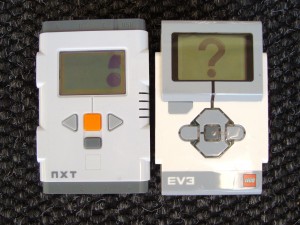 Motors and sensors: The EV3 software will run the NXT, including the NXT motors and sensors, with the exception of the old light sensor (non-color version). The EV3 motors will run connected to the NXT, but the EV3 sensors will not. The medium motor block in the EV3 software will not run on the NXT, but you can use the large motor block to power the medium motor.

Data logging: The EV3 data logging software can be used to log sensors with the NXT. However, the graphical programming function, which allows you to program the motors using trigger values from the sensors, does not work with the NXT.

Robot Square has a nice comparison of the EV3 and NXT, including a discussion of compatibility.

Barbara teaches at the Shady Hill School in Cambridge, Massachusetts and works at the Center for Engineering and Education Outreach at Tufts University. She is the author of several LEGO robotics activity books for teachers, most recently STEM by Design.

2 thoughts on “Using EV3 software to run the NXT”