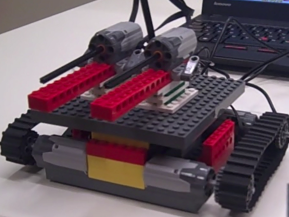 Two Sydney Primary school students came up with the idea of building an army-style tank using several WeDo motors and a pair of rubber caterpillar tracks. Like most ambitious tank ideas, I assumed the students would give up after 30 minutes. But to their credit they actually pulled it off, and even got it to move! But as you might expect, with more than one WeDo motor, the students ran into some problems getting the motors to work independently with the WeDo software. When they came to me and asked how could they get it to steer correctly, something woke inside of me.

I then launched into revealing to the students WeDo’s multitasking ability when using more than one motor or sensor (hold the SHIFT key and click the mouse over the icon). The boys seemed sufficiently happy with that, until they asked about controlling it with a remote. Well, at that point, whatever woke inside of me previously was merely a prequel to the main event! I scurried between two laptops and proceeded to demonstrate WeDo’s wireless messaging ability, with computers on the same network.

After some to-ing and fro-ing, we worked out the sequence of the various tilt sensor instructions to match the forward and reverse operations of the motors. This effectively gave us four different movements (forward, backward, left and right) – all operated from a small WeDo plate with a tilt sensor from a laptop across the room.

I’m not sure who was more excited, the boys or me! Needless to say, I gave explicit instructions to the boys not to dismantle the tank (until I had sufficient playing time with it!). 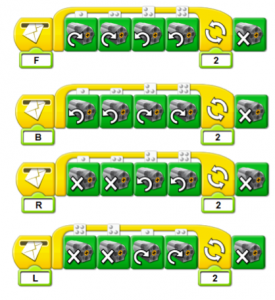 One thought on “WeDo army tank with wireless remote control”