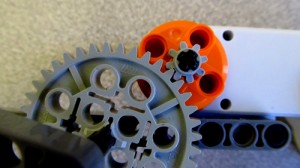 Engineering is the process of designing of solutions to human problems. Engineers apply ingenuity in devising novel solutions, using expert knowledge of the properties of materials and systems to model the behavior of the design.

Most engineering models are mathematical in nature. Examples include include the equations for design of a low-pass filter (in electronics), or the forces on a beam in structural engineering.

In the case of software engineering, such models include algorithms such as a bubble-sort, or data structures such as simply-linked lists.

The design of robotics systems is a mixture of mechanical engineering and software engineering. In designing LEGO robots, a young engineer will learn to understand mechanical concepts such as gear ratios, torque, cams, and levers, and computer science concepts such as loops, conditionals, polling, and variables. These concepts are then combined with ingenuity and art to devise a robotic system which can perform a useful task, whether for work or for amusement.

See also What is technology? and What is the difference between engineering and technology?

Jonathan is a teacher from Weston, Massachusetts, working to improve the teaching of project-based science, technology/engineering, and design in Grades K-8. After graduating from MIT with degrees in life sciences and electrical engineering, Jonathan was a clinical engineer with the Veterans Administration from 1975-2000, with a multitude of projects including prosthetic devices and interfacing, ICU, cath lab, operating room design, and other projects.