It seems reasonable to expect that when you program a robot to drive straight, it should just work. And, of course, this is what the Move Steering block in the EV3 Software is designed to do.

The Move Steering block makes use of shaft encoders in the motors and a proportional feedback controller in the software, to keep the motors in sync with each other.

Test this out for yourself by programming a two-wheeled robot to drive forward for 10 rotations, using the Move Steering block. Pick the robot up and start the program. While the program is running, grab one of the wheels and see what happens to the other.

The Move Steering block certainly makes it easier for beginners to get started with programming than if they had to use separate blocks for each motor. A trade off for this simplicity, however, is that the details of how the block works are hidden from the user. In particular, the proportional feedback processes involved in moving a two-wheeled robot forward. 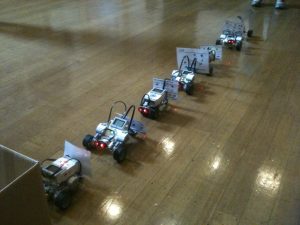 Martin’s paper raises important questions about engineering education and robotics competitions in particular. Through a focus on feedback control, he explores the role of robotics in education, and the pedagogical challenge to develop technologies and activities that highlight key ideas in the fields being taught.

In the paper, Martin argues that feedback is a central process not only in our lives but also in engineered systems. Feedback is pervasive, but often invisible.

“Autonomic body processes, like temperature regulation and breathing, happen without our conscious attention, and learned activities, like balancing and walking, are performed without deliberate attention.”

“Over time, our ability to engineer feedback systems has also steadily improved, to the point where vehicles and processes that would normally be highly unstable (e.g., a fighter jet aircraft) can be made to “fly straight.”

Martin concludes that “both biological and engineering systems do make contact corrections, be they minimal to the edge of perception. As educators, we must introduce students to this central principle, not hide it from them. Real robots don’t drive straight.”

Some of the reasons that robots don’t drive straight

Here are some of the reasons that a typical EV3 robot might not drive straight and some suggestions.

If we accept that real robots don’t drive straight, then perhaps a better approach is to avoid giving our students challenges that rely on dead reckoning. Instead we should provide opportunities to use physical constraints and/or sensor information to localise and update the movement of their robots.

Whether a feedback approach is suitable obviously depends on how the challenge is framed, but might include one or more of the following strategies.

2 thoughts on “Why Doesn’t My Robot Drive Straight?”