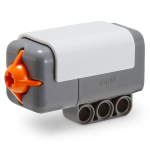 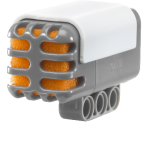 The Sound Sensor can detect both decibels [dB] and adjusted decibel [dBA]. A decibel is a measurement of sound pressure.

dB: in detecting standard [unadjusted] decibels, all sounds are measured with equal sensitivity. Thus, these sounds may include some that are too high or too low for the human ear to hear. 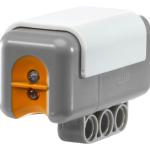 The Ultrasonic Sensor measures distance in centimeters and in inches. It is able to measure distances from 0 to 255 centimeters with a precision of +/- 3 cm.

The Ultrasonic Sensor uses the same scientific principle as bats: it measures distance by calculating the time it takes for a sound wave to hit an object and return – just like an echo.

Large sized objects with hard surfaces return the best readings. Objects made of soft fabric or that are curved [like a ball] or are very thin or small can be difficult for the sensor to detect.

* Note that two or more Ultrasonic Sensors operating in the same room may interrupt each other’s readings.

Each motor has a built-in Rotation Sensor. This lets your control your robot’s movements precisely. The Rotation Sensor measures motor rotations in degrees or full rotations [accuracy of +/- one degree]. One rotation is equal to 360 degrees, so if you set a motor to turn 180 degrees, its output shaft will make half a turn.

One thought on “NXT Sensors”