The Nevada Space Grant, the University of Nevada-Reno, National Instruments, the Energizer Battery Company, and the LEGO MINDSTORMS Team commemorated the 10th anniversary of LEGO MINDSTORMS by conducting an extravaganza where they sent LEGO MINDSTORMS payloads to near-space altitudes on a weather balloon. To read more about the H.A.L.E. (High Altitude LEGO Extravaganza) project, read the HALE article on this site. In this article, one invited team from Luxembourg shares the adventure of building their payload called the LUXPAK.

The Luxembourg LEGO MINDSTORMS  program was honored to be intivited to participate in the H.A.L.E. (High Altitude LEGO Extravaganza) project, a by-invite-only event, and overjoyed at the announcement that their payload project was chosen to take a ride. The team from Luxembourg is composed of Claude Baumann, Francis Massen, Jean Mootz, (Luxembourg high-school teachers), the Bisch flisches Konvikt Luxembourg robotics group and a 12th grade math class in collaboration with the Lyce Classique Diekirch meteorological station. The team named the payload project LUXPAK (Luxembourg package).

Playing with the educational ideas of ETH professor Karl Frey for many years to promote science and technology activities in schools, the Luxembourg LEGO MINDSTORMS program has produced projects that are widely known and often cited as references, especially the GASTON, NIC_1 and MARS MISSION robots.

The team was unprepared for the H.A.L.E. challenge, and hurried to brainstorm a payload model that would fulfill the challenge criteria:

In this LEGO® MINDSTORMS after-school project the students and the teachers both act as researchers. None of the team members had ever participated in making a weather balloon payload before, nor did anyone fully understand the difficulties that would be encountered sending a payload to such an environment. This equality in the knowledge state of all team members (teachers and students) was essential for the enthusiastic dynamics of the project. In Seymour Papert’s sense, the traditional separation of the erudite and the ignorant had disappeared all around this challenge.

The first step was researching (Googling) to see what other people had done before. After a few discussions the decision was made to create a payload that would operate a series of meteorological measurements in order to obtain a vertical profile of the parameters:

These objectives require intensive datalogging capabilities. Although the LEGO NXT brick would have been the best choice in this case with its superior computing power, the team chose to honor the RCX brick since the H.A.L.E. event was commemorating its ten year anniversary.

Next the tasks were distributed:

To measure the ozone-concentration of the atmosphere, the team needed the external air to reach the sensors embedded in the payload. A tube was installed to transport the external air to the sensor nose. Although the sensor (A-21ZX from ECO-Sensors) pre-heats the air, its heating power would not be sufficient to compensate for the extreme low temperatures at high altitude. Therefore a temperature control system was designed to maintain the air-temperature above 10°C. This system should also help maintain function of all the electronics on-board to return the necessary data from the trip.

One major issue with the RCX brick is the risk of losing the data from RAM if the batteries are dislodged from the RCX, which could occur when the parachute crashes during landing. This concern along with the teams’ desire to have a system that allowed the LUXPAK to be activated by pressing just one button required special consideration. The solution was a special PIC16F88 microcontroller-device called SNOOP_LOG that represents a combination of an RCX bootloader and a flash datalogger. This solution allowed, with some rewiring, for a system that met both of these needs.

The PIC and the RCX in the LUXPAK are programmed with an experimental software called ULTIMATE ROBOLAB(TM) that was developed a few years ago in collaboration with the Center for Engineering Educational Outreach® (CEEO).

The assembly group had to balance between the technical requirements for functionality, stability (survive the landing impact), compactness, practicality, access for maintenance, well-ordered wiring, and weight. The LUXPAK team is especially proud of the solution the assembly group (made up of students) arrived at (see Fig. 1). For example, one problem that was marvellously solved was how to assure that the RCX plugs would not break loose during the transportation to the Nevada launching ground (across the Atlantic Ocean). The students built a sort of shroud to keep the RCX wires secure to the input and output ports (see Fig. 2). 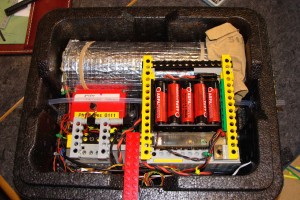 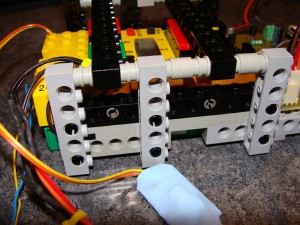 Once LUXPAK is switched on, SNOOP_LOG tests if the RCX brick is awake. If not, it automatically turns on the RCX through a wire that has been soldered in parallel to the RCX On/Off button (yes, the RCX has been hacked!). Then it tests if the firmware is running, which probably is not the case. SNOOP_LOG then transmits the RCX firmware from its EEPROM memory via the infrared channel just as it were a LEGO® tower connected to a PC. The team’s RCX firmware was specially developed for use with LUXPAK. Once loaded, it immediately starts running and takes over the LUXPAK control of datalogging, temperature regulation, and battery survey. 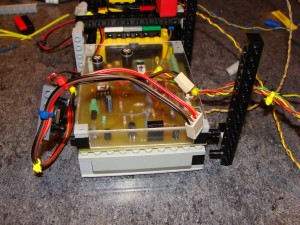 Fig. 3 : The RCX brick with the SNOOP_LOG board

Since the RCX brick programming was done with the ROBOLAB(R) environment, most tests of the RCX functionality were done using ROBOLAB’s INVESTIGATOR level. However the SNOOP_LOG data extraction and analysis is executed with the LabVIEWÂ® graphical programming environment.

The students learned much about the essence of temperature control, especially the advantages of two-point control systems. They experienced the discharging features of NiMH batteries. For example, they found a bug in SNOOP_LOG that was related to low battery state, which is known as micro-controller brown-out condition. 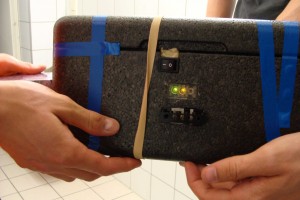 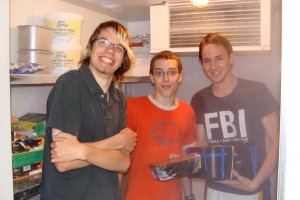 Fig. 5 & 6 Testing LUXPAK in the cold of a freezing chamber 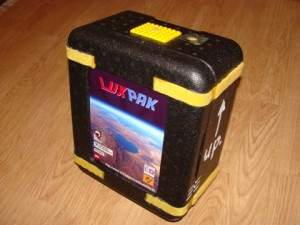 The LUXPAK team of educators view the H.A.L.E. contest as an excellent educational engineering project for several reasons. First, the students and the teachers both had to deal with exotic problems far beyond their normal experience. Thus, the team had to research unfamiliar meteorological and physical conditions in an environment that probably none of them will ever enter in person. Second, similar to other Luxembourg projects, LUXPAK had to be developed for use by people not on the team (Nevada H.A.L.E. team). Developing a product for others to use forced the team to consider many “what ifs” and “I hope they don’ts” as they designed the interface other users would interact with. This anticipation exercise is far more difficult than just imagining the machine’s reaction at expected handling. Third, the combination of a “one-system” material (LEGO pieces and software) and “non-system” material (PIC microcontroller, SNOOP_LOG), required a lot of out-of-the-box thinking. Finally, and perhaps the most important point, all participants had fun and learned science and technology are cool.